A few weeks ago, I performed in a ‘storytelling marathon’ in São Paulo. A Brazilian storyteller called Dani Barros told this story. She heard it while travelling in Burkina Faso and Mali…

There was once a path which led through a forest. At the end of this path was a village, and the village was famous for a particular reason. People said that whoever went there was changed in some way.

It was a long way to the village. The path wound through the forest for many miles. And about halfway along it, there was a house where a widow lived with her son. This was good news for travellers on their way to the village. Many of them would break their journey at the widow’s house, and sleep there for a night.

That’s exactly what happened one day. A stranger came walking along the path and, when he reached the house, the widow went out to greet him. “It’s a long way to the village,” she said. “Perhaps you’d like to spend a night with me and my son.”

The stranger accepted. The next day, he carried on his journey.

Several weeks went by. Then the traveller came back. “How did you like the village?” asked the widow.

“I was disappointed,” the man said to her. “I thought it was going to be special in some way. But it’s just a village in the middle of a forest. The people have very little. Nothing interesting seems to happen. So I decided to leave the place.”

“Of course,” said the widow, and the traveller went on his way.

Only a few days later, another stranger came walking along the path, and the same thing happened. When he reached the house, the widow went out to greet him. “It’s a long way to the village,” she said. “Perhaps you’d like to spend a night here.”

The stranger accepted. He spent a night with the widow and her son. Then, the next day, he continued his journey.

Several weeks later, the stranger came back. “How did you like the village?” asked the widow.

“It was the most beautiful place I have ever seen,” he told her. “I couldn’t believe how colourful the flowers are and how tall the trees grow. Children run around freely, and the older ones look after the younger ones. Every night the villagers gather together to dance and tell stories. I felt so happy there, I’ve decided to go and fetch what I own, and go back to live there!”

“Of course,” said the widow, and the traveller went on his way.

His mother replied, “Well, that’s because everyone sees the world according to what they have in their heart.”

And the boy said, “Of course.” 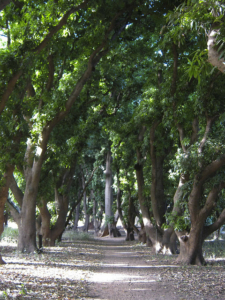