Follow this link for a rhythm-and-fun-filled reading of my recent picture book, IT’S A GROOVY WORLD, ALFREDO! : http://www.bbc.co.uk/iplayer/cbeebies/episode/b06z8xqr/cbeebies-bedtime-stories-520-pete-dalton-its-a-groovy-world-alfredo . 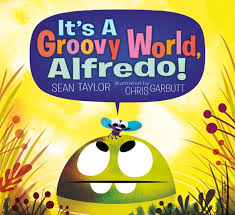 The book is dedicated to the big-hearted, political, performing poet, Adrian Mitchell.

from his magical coat of umpteen pockets…

Adrian Mitchell helped me along my writing path. His help came from conversations I had with him (sadly, no longer possible.) And it came from examples he set in his own writing (very much still available and as fierce, funny and inspiring as ever…)

He is a poet remembered for the big-heartedness, the fierceness and the performing I have mentioned above. But I chose to dedicate IT’S A GROOVY WORLD, ALFREDO! to him because it’s a musical and a playful story.

Adrian Mitchell was the most musical of poets. He taught me that the rhythms and lyrics of songs can make words dance, even when there’s no actual music.

And he was playful, even when writing about things he took very seriously. Here’s an example which comes to mind – his words on the subject of bringing more poetry into school classrooms: “Make poetry something to look forward to. If you can’t get a poet, why not bring something else into the classroom? There aren’t enough animals in school – bring in a dog! Or puppies. Once the children have stopped playing with them they’ll want to write poems. Maybe the best thing to bring in would be a giraffe…”